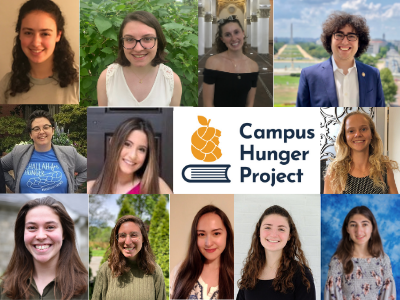 Challah for Hunger is thrilled to welcome the fourth Campus Hunger Project Cohort! This year, Cohort leaders will spend the year developing campaigns on their campuses to better meet basic needs insecurities on campus and highlight student need during COVID-19. We’re absolutely inspired by their visions for change and leadership.

Alyssa Malerman, Penn State: Alyssa Malerman is a Junior at Penn State majoring in Communications Arts and Sciences with minors in Spanish and Human Development and Family Studies. Outside of her classes, Alyssa is very involved on campus through her work as the Vice President of Penn State’s chapter of Challah For Hunger as well as her role as Community Chair of her THON organization which raises money and provides emotional support for families facing pediatric cancer. Alyssa is looking forward to working with the Cohort to create positive change on our campuses!

Leah Bodinger, Penn State: Leah Bodinger is a Sophomore at Penn State studying Food Science with a minor in Music Performance. She is currently the secretary for PSU’s Challah for Hunger chapter, manages Public Relations for the Food Science Club, and participates in Hillel activities. Leah is also a mentor for incoming and perspective Food Science students. She is looking forward to making positive changes for the Penn State community through collaboration with other members of the Cohort.

Melanie Leider, Middlebury: Melanie Leider is a Sophomore at Middlebury College in Vermont. She is majoring in Anthropology and minoring in Environmental Studies and Spanish. At Middlebury, Melanie serves as a mental health peer educator, a public speaking coach, and a Spanish interpreter at the local clinic in town. She is passionate about social justice and environmental sustainability, as well as exploring the intersection between the two. As a Challah for Hunger Cohort member, Melanie plans to spread awareness about food insecurity on Middlebury’s campus and make food resources more accessible.

Anastasia Esther, UW Milwaukee: Anastasia Esther is a Senior Film, Video, Animation and New Genres major at UW – Milwaukee. Her minors are in Journalism and Jewish Studies with a focus in Holocaust education. As an active member of the Milwaukee Jewish community, she is the president of the UWM Chapter of Challah for Hunger, the Chair of Community Action at Hillel Milwaukee, and she teaches Introductory Jewish Ethics for 3rd and 4th grade at her synagogue. She is also a contributing writer for Heyalma.com. As a HERC Holocaust Education Fellow as well as Lubar Scholars in Film Award recipient, her work focuses on providing awareness and digity to many issues facing our modern community, including the disestablishment of poverty, antiracist action, and the decolonization of our communal spaces.

Sophie Schoenbrun, Vassar: Sophie is a junior at Vassar College (in Poughkeepsie, NY) majoring in Political Science and minoring in Education and Hispanic Studies (Spanish). She has been involved in Vassar’s chapter of Challah for Hunger since her freshman year, serving first as the Secretary and then as Advocacy Chair. With Challah for Hunger, she has done extensive research into student experiences of hunger on Vassar’s campus, has written a piece for the college’s student newspaper, The Miscellany News, and worked with various members of the administration to make food more consistent, accessible, and affordable for students over breaks from the academic term. She was awarded the Wendy Rae Breslau Award for campus service in the Spring of 2020. Sophie is very excited to be on this year’s Cohort, and she can’t wait to see what we can accomplish together over this short time.

Randy Cantz, UC Berkeley: Randy Cantz is a senior at UC Berkeley pursuing a degree in History and a minor in Public Policy. He is focused on gaining critical insights into the measures necessary to institute salient and long-lasting policies at state and national levels. An active member of his school’s community, Randy is President of Phi Alpha Theta, UC Berkeley’s history honor society, a Senior Associate for the Chief Legal Officer in the ASUC’s Office of Legal Affairs, an undergraduate fellow for the Berkeley Institute for Jewish Law and Israel Studies, and Advocacy Director of Berkeley Hillel’s Challah for Hunger chapter. Randy’s goal is to ultimately pursue a career centered on social advocacy, focusing specifically on the way in which technology shapes law, democracy, and social memory.

Rebecca Grunberger, Muhlenberg: Rebecca Grunberger is a sophomore at Muhlenberg College majoring in Psychology and minoring in Public Health. Ultimately, Rebecca’s goal is to be a clinical psychologist in her own private practice. When it comes to campus life, Rebecca is very involved; Rebecca is a public relationist of Mental Health Peer Educators, is a part of the psychology club, is the assistant publicity director of Challah for Hunger, and is a part of Best Buddies. Through Rebecca’s commitment and passion in helping others, Rebecca is adamant about addressing food insecurity amongst college campuses. With Rebecca’s experience with marketing on social media platforms, Rebecca is confident that she can get her message across both on an online presence and throughout her campus.

Laura Diep, UC Davis: Laura Diep is a senior at UC Davis majoring in Managerial Economics with an emphasis in Business Economics and minoring in Technology Management. She later hopes to earn a Master’s Degree in Economics with the goal of working for the Legislative Analyst’s Office of California. Currently, she is the advocacy coordinator of the Challah For Hunger chapter at UC Davis after joining the board last fall. In her free time, she enjoys learning about sociology and critical race theory as well as studying Chinese. Laura is excited to gain insight into the specifics of advocacy work for food insecurity and to apply that knowledge when campaigning for change in any setting.

Molly Babin, Middlebury:  Molly Babbin is a junior at Middlebury College in Vermont. She is majoring in International and Global Studies with a focus in Latin America and loves studying Spanish, Anthropology, Sociology, and Political Science. On campus, she participates in environmental justice and food justice activism and is passionate about LGBTQ+ rights. She is social justice chair of Midd Hillel and loves exploring the intersections between activism and spirituality. Molly looks forward to building connections and thinking creatively as she works to confront food insecurity with the CHP Cohort.

Ava Bianchi, Muhlenberg: Ava Bianchi is a Sophomore at Muhlenberg College and is majoring in International Studies with a minor in Spanish. She was the secretary of the Challah for Hunger chapter at Muhlenberg and was also a part of Muhlenberg’s JLF program. Apart from her [participation in CFH she is on her college’s cheer team, and is involved in clubs such as mock trial, spanish club, wall street club, as well as she is a campus delegate and Dana Scholar. Ava is super excited to make a tangible impact on her college campus as well as to continue to learn and educate others about the importance of food insecurity on college campuses and beyond.

Sarah Margulis, Butler: Sarah Margulis is a Chicago native and a senior psychology major at Butler University. She is entering her third term serving on the board of Butler’s Challah for Hunger chapter. She hopes to find creative solutions to food insecurity. Sarah is also a member of Hillel and a staff writer at HerCampus, an online platform for collegiate women. In terms of academic involvement, she is a member of two honors fraternities. Sarah is striving to expand the psychology program at Butler and wrote a proposal for a Concentration in Child and Family Studies. Upon graduation, Sarah plans on continuing her education.

Ari Schreibman, UMass Amherst: Ariana (Ari) Schreibman is a sophomore majoring in English and Psychology at University of Massachusetts Amherst. Ari is passionate about helping others and has worked with children and the elderly for over six years. She interns at Northampton Pottery, as it’s important to her to be involved in the greater community. On campus, Ari is an active member of Hillel, the Student Alliance for Israel and the Outing Club as well as the vice president of her school’s chapter of Challah for Hunger. She is excited to gain new skills and form connections that will help her make a difference in her campus community and beyond.

For the second year, we are fortunate to have four incredible mentors to support the creation of the new Cohort’s campaigns, as they continue to work on theirs. Welcome back, Paige and Monica, and welcome this year, Hannah and Natalia!

Hannah Rice, Occidental College: Hannah was born and raised in Los Angeles, CA. She is a senior at Occidental college and is president of their Challah for Hunger chapter. She is also a vegan and loves her three rescue dogs and four cats. Hannah is a psychology major and a politics minor; she is hoping to get a social work degree and help special needs children.

Monica Sager, Clark University: Monica is a senior at Clark University, working toward a double major in psychology and self-designed journalism with a minor in English in hopes of becoming an investigative journalist one day. Monica is the advocacy chair of her Challah for Hunger chapter and has written multiple opeds on the topic of food insecurity. Two years ago, she served as a Cohort leader and worked to fight food insecurity on campus with a food aid plan. In her free time, Monica loves to play the bass, read, and go on adventures.

Paige Swanson, NC State: Paige is a senior at NC State University working towards a B.A. in Science, Technology, and Society and a B.S. in Applied Nutrition with a nonprofit studies minor. She founded the NC State chapter of Challah For Hunger and served as president of the chapter for two years. On a national level, Paige participated in the Campus Hunger Project Cohort last year and will serve as a student representative during 2020. Outside of Challah, Paige enjoys volunteering with her sorority, bouldering, and painting.

Natalia Kulczycki, UVA: Natalia grew up in Virginia and is pursuing a double major in Russian & East European Studies and Computer Science at the University of Virginia. In addition to serving as the education and advocacy chair for Challah for Hunger this past year, Natalia helped to establish the Community Food Pantry at UVA as a drives coordinator. In her free time, Natalia enjoys teaching software development, and playing water polo.