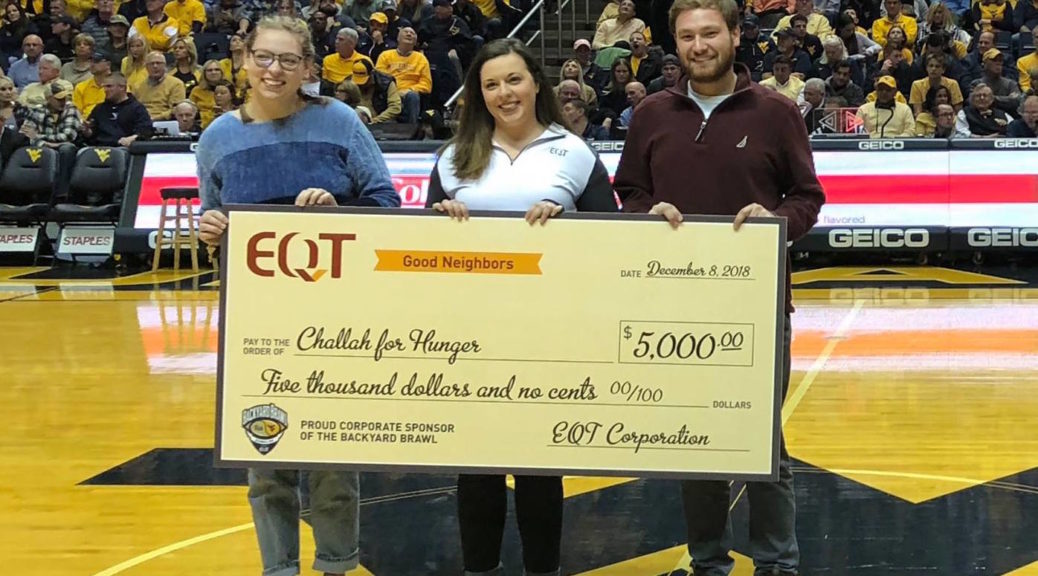 “We knew we had to do something,” said Emma Rose Shapiro, president of Challah for Hunger at Pittsburgh. In the days following the senseless violence at Tree of Life Synagogue that left eleven dead, student leaders of the Pitt chapter came together to mourn and to act.

Student volunteers organized a “Braiding Together Against Hate” event on November 2, a special event where, in addition to their usual baking, braiding, and selling of challah to raise funds for 412 Food Rescue or Just Harvest, they created a form where people could donate to “sponsor a challah” to give to Tree of Life congregants at Shabbat dinner.

The response was overwhelming.

“In just a few days we had orders for over 1,500 loaves of challah and had raised more than $3,400 for the Pittsburgh Jewish community,” said Emma.

Usually, around thirty volunteers come together to bake and braid, but on November 2 more than 230 volunteers flooded the kitchen.

But the most uplifting part of the experience was the response from members of Tree of Life and two other local synagogues when Pitt students delivered the challahs. “People cried,” recalled Emma. “It’s because it’s not just money—it’s challah. It has so much symbolism. It’s literally baked with love.”

To support the sudden dramatic increase in expenses for ingredients as well as their ongoing campus advocacy work fighting food insecurity, the Pitt chapter applied for the EQT Corporation’s Good Neighbor Award. EQT, official sponsor of the Pitt-West Virginia Backyard Brawl basketball game, joined with both universities several years ago to annually recognize one student group from both the Pitt and WVU campuses that support their local communities through service work.

“I never thought we’d get it,” reflected Emma. “But a few days ago I got the call from EQT—they said their awardee board unanimously decided to grant Challah for Hunger at Pitt the $5,000 because we represented ‘the outstanding community service’ they believed in.”

Continuing to practice community, advocacy, and philanthropy—the touchstones of Challah for Hunger’s mission—CfH at Pitt leaders decided to split half of the award between a local hunger relief organization and CfH national partner MAZON and use the other half to expand their campus advocacy and education work.

“We are so much more than a bake sale,” said Emma. “We have the opportunity to be the resource on our campus for food insecure students and we plan on using this award to help us continue our advocacy efforts.”

Congratulations to the leaders and volunteers with CfH at Pitt for this amazing achievement!