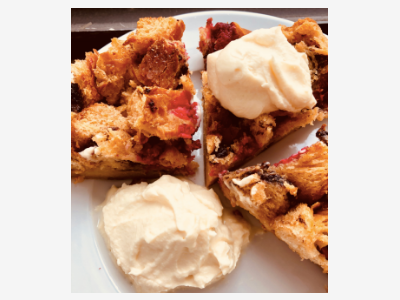 Our next featured recipe from the Soom x Challah for Hunger Recipe Competition comes from Caryn Roth, an alum of CfH at UCLA! For Caryn’s inspiration, she said she “wanted to use both
the chocolate and original Soom tahini spreads. I used the classic Challah for Hunger recipe and made a chocolate halva stuffed challah, just like the stuffed challahs I used to make as a student
through CfH. I resisted eating that deliciousness so I could make it into a bread pudding, one of my favorite desserts. I topped it with a tahini whipped cream to sneak in some extra sesame flavor and pop!”

Follow the steps below to try Caryn’s recipe out for yourself!

Steps
• Mix the sugar, oil, salt and water in a large bowl until dissolved.
• Add 3 cups flour and mix. You will not necessarily be able to get rid of all the clumps of flour yet; that’s okay; just keep going.
• In a separate, small bowl, combine 1 tablespoon instant yeast with one cup of flour. After the yeast has been thoroughly mixed into the cup of flour, add the mixture to the dough.
• Continue adding flour, between 2 and 4 more cups. As your mixture becomes more solid, add the flour more and more slowly. Add flour until you reach the point when, if you press the dough gently with clean fingers, no dough sticks to your hands.
• Let the dough rest for 10 minutes. Take a break! Then knead, using the heel of your hand, not your fingers) for 6 minutes. (You may have to add some flour while kneading, but be conservative.)
• Put the dough back in the bowl, cover with oil and then drape a towel over the bowl, and let it rise for at least one hour (but monitor it to make sure it doesn’t overflow the bowl). You can let the dough rise overnight in the fridge (the rising process slows down in cooler temperatures).
• Separate dough into four balls and fill with Soom chocolate sweet tahini halva spread.
• Braid and egg wash; then let the loaf rise before you bake it. Bake at 350 until golden-brown (30-45 minutes).

Steps
• Preheat oven to 275° F.
• Spread bread cubes into a single layer on a baking sheet and slide into the oven to dry out, for about 15 to 20 minutes
• Meanwhile, whisk the milk, cream, sugars, eggs, vanilla, cinnamon,
and nutmeg together until smooth.
• Increase oven temperature to 350° F and grease an 8-inch round pan or another small, oven-safe dish.
• Dump dried bread cubes into a large bowl with the egg mixture
and mix to coat. Allow the mess to hang out for 20 minutes so the
bread can soak up as much of it as possible. Fold in the raspberries, and then pour the prepared pan.
• Bake bread pudding for 30 minutes, until golden brown and puffed up.

Steps
Blend all ingredients with a hand mixer or vitamix until it’s the consistency of whipped cream. If making in a vitamix, the sound will change so you’ll know it’s ready. Do not overmix. Top bread pudding with tahini whipped cream and enjoy!