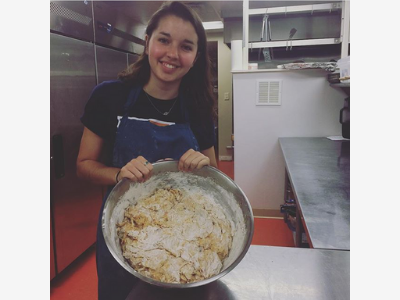 This post is from Gwen Dilworth, a 4th Year American Studies major from the University of Virginia (UVA) and current president of CfH at UVA.

When I first volunteered with Challah for Hunger during my first year at the University of Virginia (UVA), I distinctly remember the then-President explaining why she chose to invest so much time in Challah for Hunger: “it’s Judaism in action.” Being in the basement kitchen of Hillel, watching hundreds of loaves of challah being made each week, I began to see what she meant. Baking challah was a tangible, physical action with the potential to enact change beyond the walls of the kitchen.

Although I had participated in projects to alleviate poverty before coming to college, I wasn’t aware of the prevalence of food insecurity on college campuses until I joined Challah for Hunger at UVA. While it had never occurred to me before college that the people I would sit next to in class might be without money for lunch—or their next month’s rent, or medicine, or textbooks—the costs associated with being a college student soon became visible to my friends and me. These concerns were echoed by older Challah for Hunger board members and volunteers who were beginning to take action on the issue and serve as a voice for efforts to alleviate food insecurity at UVA.

During my third year, after returning from studying abroad, I was offered the opportunity to become the director of a new food pantry effort at UVA. Though Challah for Hunger leaders had been talking about opening a food pantry for years, the momentum to take action on food insecurity was finally present in the UVA community. Through collaboration with other student organizations who shared similar concerns, the guidance of faculty and staff members, and the support of the UVA community, UVA will have an operational food pantry by mid-Fall of this year.

From my time as a first-year in Challah for Hunger learning about issues of food insecurity on college campuses and seeing them manifest themselves in the lives of those around me to becoming the President of Challah for Hunger and Director of the UVA Community Food Pantry, my perspective on campus hunger has changed dramatically. While Challah for Hunger has worked for years to establish a food pantry on-grounds at UVA, I now see food pantries as essentially inadequate. Food pantries are a critical resource for both students and staff members at universities across the nation—especially as tuition costs rise and wages remain stagnant—but they aren’t a comprehensive solution to campus hunger. As those at UVA who have been working on issues of food insecurity come closer to reaching this long-awaited milestone, we are also able to see beyond to greater opportunities for institutional change and justice in our community.

At UVA, the simple act of making challah has led to much more than might be immediately visible in the Hillel kitchen. Though Challah for Hunger at UVA was founded in 2011—just 7 years ago—it has helped to establish philanthropy, education, and advocacy networks at UVA that are enacting tangible change within the UVA, Charlottesville, and national communities. Challah for Hunger hasn’t simply taught me how to make a great loaf of challah, or that campus hunger is an issue worth advocating for. Rather, it has taught me that sometimes, the first step is simply action: be it as simple as braiding a loaf of challah, speaking out against unjust legislation regarding hunger, or starting a food pantry. Over the course of my four years at UVA, I’ve begun to see clearly how Challah for Hunger is Judaism in action, and how action can become change.