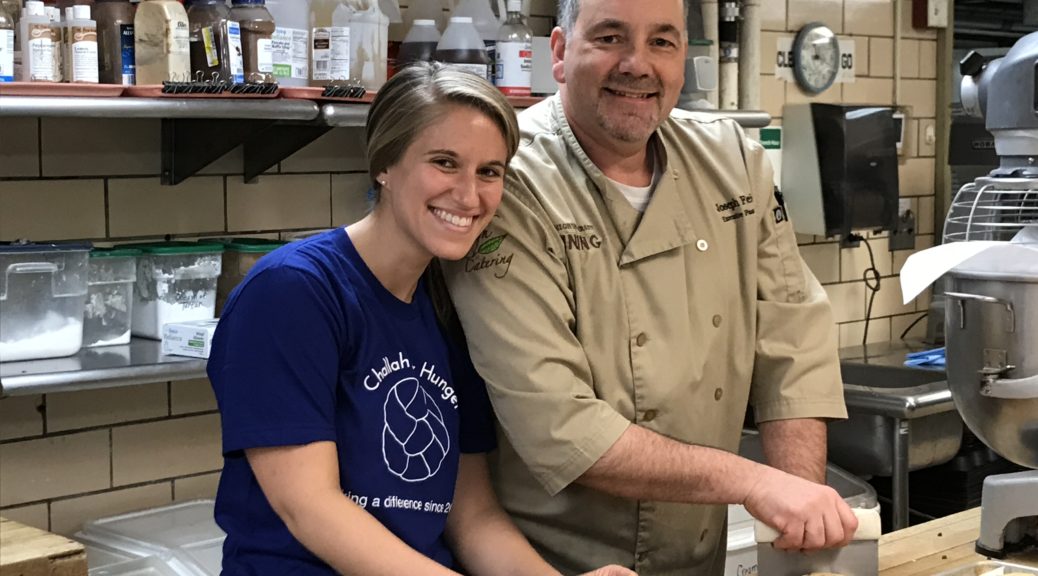 As my Instagram caption from November 28th reads: “Nothing better than spending #givingtuesday at the place that started it all.”

Lehigh University, my alma matter, is the place that started it all. On Giving Tuesday, a global day of giving back, I had the opportunity to reconnect with students and administrators giving their time, energy and resources to Lehigh’s chapter of Challah for Hunger, a chapter I helped found as a college freshman.

I entered Lehigh having had significant Jewish involvement in high school and I was eager to continue my Jewish engagement on campus. Though I truly loved planning programs at Camp Eisner and serving on the NFTY (Reform Jewish Movement) youth board, I was looking for something deeper, something that focused more on tikkun olam and social justice. When my friend at Indiana University described how Challah for Hunger’s chapter program is grounded in social justice, philanthropy and advocacy, I knew I had found my next project.

Founding a chapter at Lehigh University initially proved challenging. I was told that students were prohibited from selling food for safety reasons, making the premise of baking and selling challah impossible. Through crucial partnerships with dedicated Lehigh staff members, we found a solution: we would bake bread in the university’s very own bakery alongside the dining staff, and ask for suggested donations when selling the next day. The bakery even graciously agreed to donate all of the ingredients!

After three and a half years of organizing baking sessions, facilitating sales, engaging local partners and liaising between the national organization and our local chapter, I handed the club off to the next group of leaders. I continued to stay involved in CfH as a volunteer, serving on the fundraising committee and as a chapter advisor. Perhaps this was my coping mechanism for graduating…

I chose to continue my social justice work post college at the Charles and Lynn Schusterman Family Foundation, a grant-making organization that empowers young Jews to engage in meaningful Jewish experiences and build inclusive communities. As a member of the grantmaking team, I support our North American grantees, which include CfH.

At a time of controversy and divisiveness, organizations like CfH remind us of the power of young people to impact their local communities and engage in advocacy. CfH started out as an organization that mobilized volunteers to address hunger and has now expanded ‘beyond the campus’, engaging those with disabilities in baking sessions, building community programming for families and taking action with the Campus Hunger Project to develop solutions to address food insecurity on the college campus.

On this recent Lehigh visit, I watched eager students braiding challah. I saw the former president and incoming president of the chapter handing over responsibilities and talking about plans to involve the local community in fundraising efforts. I reconnected with the faculty advisor who was critical in developing our partnership with the bakery and starting the chapter. I saw the bakery staff, who still donate time and resources every month to CfH. It’s thanks to this community of dedicated volunteers that Lehigh’s CfH chapter continues to flourish.

I am proud of Lehigh’s chapter, and humbled that I was able to go on a site visit with such passionate and devoted Challah for Hunger staff. Thank you to CfH’s national team as well as every student who works hard on campus to give back to their communities, fight campus hunger and engage students in social justice. May we all continue to give, knowing that it will come full circle.