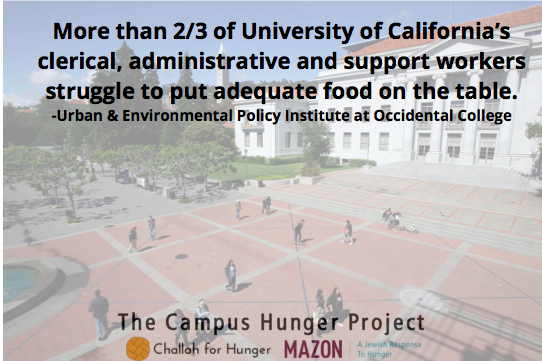 Who besides students and professors are on a college campus every day? Employees. Universities employ anywhere from thousands to hundreds of thousands of workers.

We got an important wake up call this week when the Urban & Environmental Policy Institute at Occidental College released a survey on food insecurity among employees in the University of California system. The UC system is the 3rd largest employer in the state and employs over 14,000 clerical, administrative and support workers. As their survey shows, more than 2/3 of these workers can’t afford to buy adequate food and are considered food insecure.

It’s important to remember that campus hunger can affect any member of the campus community, from the students sitting inside lecture rooms to the administrative staff working in the office next door.

Why do so many UC employees struggle to afford adequate food? One variable is the high cost of living in many of the counties where the 10 campuses of the UC system are located.

We’ve delved into this issue in previous Campus Hunger Project updates. The competing priorities of paying for rent, mortgages, transportation, utilities, and food force people to choose between covering their basic needs and other urgent expenses.

Now that we know that food insecurity exists on such a widespread level at one of the nation’s largest university systems, we won’t be surprised if similar reports start to come out. This is not an issue in California alone.